MOTHER OF THE CHURCH
Blessed Theotokos and Her Holy Son, Our Lord

AMBROSE OF MILAN
​“Imitate her [Mary], holy mothers, who in her only dearly beloved Son set forth so great an example of material virtue; for neither have you sweeter children [than Jesus], nor did the Virgin seek the consolation of being able to bear another son” (Letters 63:111 [A.D. 388]).
​ 39 Now Mary arose in those days and went into the hill country with haste, to a city of Judah, 40 and entered the house of Zacharias and greeted Elizabeth. 41 And it happened, when Elizabeth heard the greeting of Mary, that the babe leaped in her womb; and Elizabeth was filled with the Holy Spirit. 42 Then she spoke out with a loud voice and said, “Blessed are you among women, and blessed is the fruit of your womb! 43 But why is this granted to me, that the mother of my Lord should come to me? 44 For indeed, as soon as the voice of your greeting sounded in my ears, the babe leaped in my womb for joy. 45 Blessed is she who believed, for there will be a fulfillment of those things which were told her from the Lord.”
​
The Song of Mary

46 And Mary said:
“My soul magnifies the Lord,
47 And my spirit has rejoiced in God my Savior.
48 For He has regarded the lowly state of His maidservant;
For behold, henceforth all generations will call me blessed.
49 For He who is mighty has done great things for me,
And holy is His name.
50 And His mercy is on those who fear Him
From generation to generation.
51 He has shown strength with His arm;
He has scattered the proud in the imagination of their hearts.
52 He has put down the mighty from their thrones,
And exalted the lowly.
53 He has filled the hungry with good things,
And the rich He has sent away empty.
54 He has helped His servant Israel,
In remembrance of His mercy,
55 As He spoke to our fathers,
To Abraham and to his seed forever.”
56 And Mary remained with her about three months, and returned to her house.
​
​Christ Born of the Virgin Mary (Luke 2)

And it came to pass in those days that a decree went out from Caesar Augustus that all the world should be registered. 2 This census first took place while Quirinius was governing Syria. 3 So all went to be registered, everyone to his own city. 4 Joseph also went up from Galilee, out of the city of Nazareth, into Judea, to the city of David, which is called Bethlehem, because he was of the house and lineage of David, 5 to be registered with Mary, his betrothed wife, who was with child.  6 So it was, that while they were there, the days were completed for her to be delivered. 7 And she brought forth her firstborn Son, and wrapped Him in swaddling cloths, and laid Him in a manger, because there was no room for them in the inn.  Glory in the Highest 8 Now there were in the same country shepherds living out in the fields, keeping watch over their flock by night. 9 And behold, an angel of the Lord stood before them, and the glory of the Lord shone around them, and they were greatly afraid. 10 Then the angel said to them, “Do not be afraid, for behold, I bring you good tidings of great joy which will be to all people. 11 For there is born to you this day in the city of David a Savior, who is Christ the Lord. 12 And this will be the sign to you: You will find a Babe wrapped in swaddling cloths, lying in a manger.”
13 And suddenly there was with the angel a multitude of the heavenly host praising God and saying:
14 “Glory to God in the highest, And on earth peace, goodwill toward men!”15 So it was, when the angels had gone away from them into heaven, that the shepherds said to one another, “Let us now go to Bethlehem and see this thing that has come to pass, which the Lord has made known to us.” 16 And they came with haste and found Mary and Joseph, and the Babe lying in a manger. 17 Now when they had seen Him, they made widely known the saying which was told them concerning this Child. 18 And all those who heard it marveled at those things which were told them by the shepherds. 19 But Mary kept all these things and pondered them in her heart. 20 Then the shepherds returned, glorifying and praising God for all the things that they had heard and seen, as it was told them.
​

​The Woman, the Child, and the Dragon

12:1 Now a great sign appeared in heaven: a woman clothed with the sun, with the moon under her feet, and on her head a garland of twelve stars. 2 Then being with child, she cried out in labor and in pain to give birth.
3 And another sign appeared in heaven: behold, a great, fiery red dragon having seven heads and ten horns, and seven diadems on his heads. 4 His tail drew a third of the stars of heaven and threw them to the earth. And the dragon stood before the woman who was ready to give birth, to devour her Child as soon as it was born. 5 She bore a male Child who was to rule all nations with a rod of iron. And her Child was caught up to God and His throne. 6 Then the woman fled into the wilderness, where she has a place prepared by God, that they should feed her there one thousand two hundred and sixty days.

Satan Thrown Out of Heaven

7 And war broke out in heaven: Michael and his angels fought with the dragon; and the dragon and his angels fought, 8 but they did not prevail, nor was a place found for them in heaven any longer. 9 So the great dragon was cast out, that serpent of old, called the Devil and Satan, who deceives the whole world; he was cast to the earth, and his angels were cast out with him. 10 Then I heard a loud voice saying in heaven, “Now salvation, and strength, and the kingdom of our God, and the power of His Christ have come, for the accuser of our brethren, who accused them before our God day and night, has been cast down. 11 And they overcame him by the blood of the Lamb and by the word of their testimony, and they did not love their lives to the death. 12 Therefore rejoice, O heavens, and you who dwell in them! Woe to the inhabitants of the earth and the sea! For the devil has come down to you, having great wrath, because he knows that he has a short time.”
The Woman Persecuted 13 Now when the dragon saw that he had been cast to the earth, he persecuted the woman who gave birth to the male Child. 14 But the woman was given two wings of a great eagle, that she might fly into the wilderness to her place, where she is nourished for a time and times and half a time, from the presence of the serpent. 15 So the serpent spewed water out of his mouth like a flood after the woman, that he might cause her to be carried away by the flood. 16 But the earth helped the woman, and the earth opened its mouth and swallowed up the flood which the dragon had spewed out of his mouth. 17 And the dragon was enraged with the woman, and he went to make war with the rest of her offspring, who keep the commandments of God and have the testimony of Jesus Christ. 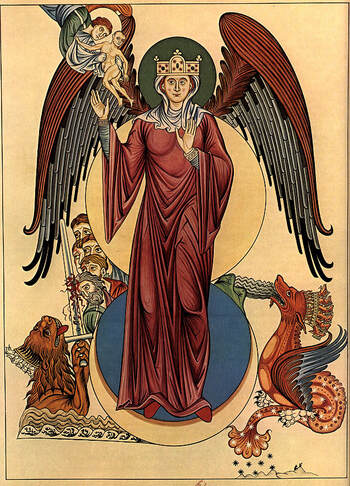 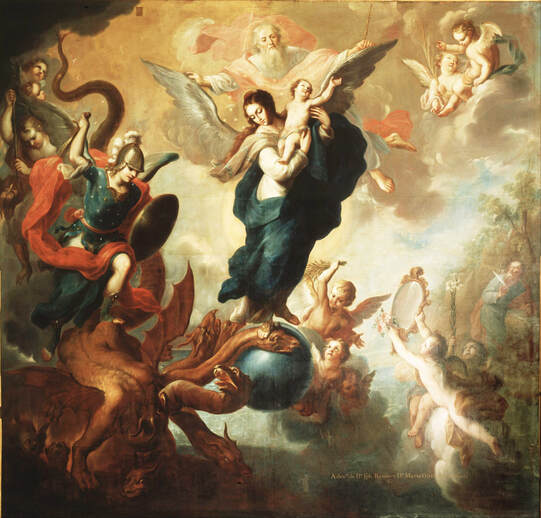 THE CHURCH - An Ancient Expression of Worship