The Book of Psalms in our Bibles was God's inspired songbook for His old covenant people, Israel, and it served them for centuries in the worship to Yahweh, the God of Abraham, Isaac, and Jacob.  These same holy Psalms (in the Septuagint) became the tradition of the first century churches who adopted them as their beloved catalog of praise music!  The holy Apostles left the churches with a blessed, perpetual heritage of Psalm singing that continues long after their earthly ministries ended.

Here is a collection of important quotes from the early Church Fathers and theologians that prove Psalm singing was ALWAYS an integral part of Christ-centered worship in the one, Holy, Apostolic Church. 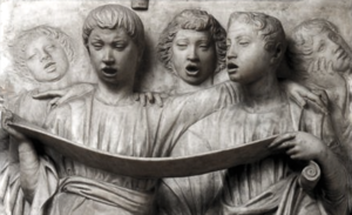 Western Rite parishes have the wonderful privilege of making use of the best music written for the Church from all the ages past, with a special obligation to use that which is from the Orthodox West. This is primarily Gregorian chant which is named in honor of our patron, St. Gregory the Great, because of his role in helping to organize it.  It is apparent that, from the beginning, the church sought to develop a uniquely Christian music, set apart from pagan worship and secular celebrations. The earliest example (c. 300) of a Christian hymn with music which has been discovered (the “Oxyrhynchos Hymn”, named for the Egyptian town where the papyrus manuscript was found) was written in Greek musical notation and in the style of other Greek music of that day. But in the flowing melody for the Amen of the hymn, the seeds of Western-style chant are evident.

As Christianity spread westward, this Western chant style developed to a high degree, providing suitable musical accompaniment to the texts sung at the Eucharist and the daily offices. Monasteries played an important role in the development of church song and for hundreds of years, the melodies themselves and the manner of singing them were passed down in an unwritten oral tradition. By the time written musical notation was becoming common in the West (c. 10th century), the manuscripts show a complete repertoire of sacred music for all the services of the church.
While there were regional variations, Western chant was (and is) characterized by unison singing (one line of music – no harmony), flowing rhythm, and the singing of many musical notes to one syllable of text (melismas). This type of chant is sometimes called “plainsong”.

As was also true for Byzantine chant, Gregorian chant gradually gave way to the inventions of clever musicians, as the art of polyphony (many lines of music sung at the same time) developed and harmony was preferred over one melodic line. Beautiful polyphonic music has been written for use in the church, but in numerous ages during the 2,000 year history of Christianity, the chant has been revived (and inevitably, revised).

Nineteenth and twentieth-century musicologists have written tomes on the subject of Gregorian chant, and there are numerous theories on the interpretation of notation, rhythm, and vocal style. For those of us in the Church, however, the chant is not just a historical subject to be taken apart and studied, but a living means of praising God. To the best of our ability, with the knowledge we have, we use these beautiful melodies in concert with the angels in Heaven.
Gregorian chant comprises much of the music that we sing in our services at St. Gregory’s. The melodies of the Ordinary chants of the Mass (Kyrie, Gloria, Sanctus & Benedictus, Agnus Dei), the Creed, the Lord’s Prayer, the Asperges are all Gregorian chant (plainsong) melodies. The chants which the choir sings at various points in the services (Introit, Gradual, Alleluia, Offertory, Communion) are all sung to Gregorian chant melodies. The Psalms and canticles of Matins and Vespers are also sung to plainsong melodies. Our parish’s patron saint has greatly influenced our choice of music!
In the early Church, the psalms were the hymns of the congregation, but in later centuries, congregational singing of psalms and other hymns was supplanted by the more expert (and complicated) offerings of the professional singers. The Protestant Reformation began to revive the practice of congregational singing and we are able to make use of some of that revival, “baptizing” it for Orthodox use. In addition to the plainsong hymns of the Middle Ages, we make use of hymn-tunes composed in later centuries, with melodies, harmony, and rhythm in a variety of styles. The St. Ambrose Hymnal, compiled by our pastor, Fr. Nicholas Alford (as his project for our Archdiocese’s Doctor of Ministry program) includes hymns from many different nations, centuries, and traditions. The hymn texts have been chosen for their agreement with Orthodox theology and the tunes were selected as ones which would best complement the texts.
​
As we, like all the followers of Christ in all the world and in all ages come together in worship, let us, like the psalmist, “..be joyful in the Lord…, serve the Lord with gladness, and come before his presence with a song.” [Ps. 100:1]
THE CHURCH - An Ancient Expression of Worship